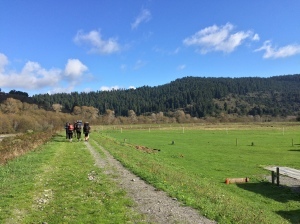 Our search for Bigfoot began in the Adventure Outings Equipment Room in the back of the WREC one chilly Thursday night. Melissa Berndt, Dani Illing and I met with our fellow Bigfoot hunters to give them the low down on what they would need to be properly prepared to take on the challenge of capturing Bigfoot. We all sat in a circle and looked over some of the gear that would be necessary to live in the wild Redwood National forest for a weekend of Bigfoot searching. We went over the route that we would take to get to the elusive Elam camp where there had been recent Bigfoot sightings. We initially thought that it would be an easy 4 mile hike on mostly flat, coastal, Redwoods terrain but oh, were we wrong. Bigfoot had seen us coming and hid all the topographical maps and removed all the seasonal bridges so we couldn’t cross the creeks and we would be forced to hike up and around them. When our meeting adjourned we agreed to meet up again later in the week to make sure we all had attained the proper gear.

When the time came to meet up and check all our gear it was another cold, stormy night. The Equipment Room was eerily quiet and there was a tension in the air, a kind of tension that could only be explained by the presence of Bigfoot. As each one of our fellow hunters came into the Equipment Room I was more and more impressed by their gear, they were very prepared to catch the beast.

Our search finally started late on Friday afternoon. The sky was ominous and once the van was packed with all our gear it was already raining. We did some group bonding activities to strengthen our relationships so that no amount of hardships in our pursuit of Bigfoot would be able to tear us apart. We entered the van wet and filled with angst to start our hunt. The journey was long, and the roads were treacherous. We kept our spirits high by singing songs from the old days like the Backstreet Boys and Willie Nelson’s “On the Road Again”. After many hours in the van we started to feel famished so we embarked on a side expedition to Tops Grocery store. It was recommended to us to try the tri-tip sandwiches. When we arrived they were out of tri-tip! It was a coincidence that we contributed to Bigfoot, he must have known that we were on our way and wanted to keep us from getting our needed sustenance. We didn’t let the lack of tri-tip keep us from continuing on our way, we fueled up on other types of sandwiches and re-embarked.

The last stretch of our drive took us along the beautiful Trinity River, a place where Bigfoot is commonly sighted. As we approached Patrick’s Point campground the rain softened and the clouds parted to reveal a bright and peculiar moon. This made for a much easier time setting up camp. As we were pitching our tents we discovered that one tent was missing stakes and another had a pole that was too short. The only logical explanation was that Bigfoot knew we were hot on his trail and he wanted to slow us down. But, there was no slowing us down. We set up camp and got a great night sleep to prepare for a long day of hiking and hunting.

We awoke early, with the sun, and prepared delicious meals. We went over our plan for the day with all the other hunters and we got into the van for the last time. There was one more stop we had to make before we could start our expedition. We stopped at the ranger station to pick up our backcountry permits and Bigfoot hunting tags. This is where we were finally able to look at a topographical map; Bigfoot hadn’t gotten the ranger station yet to hide the maps. Once we read the map we learned that it was actually going to be 6.5 miles and the trail was quite steep. It was going to be a strenuous day of hiking and hunting but everyone was up for the challenge.

We arrived at the trail head and our adventure really began. The trail started in a beautiful open field that had a creek on one side and a forest of huge Redwood trees on the other side.

Once we started up the hills we got into the thick woods and the presence of Bigfoot was felt even more. We hiked for about an hour then stopped to take a lunch break and we all discussed how we would capture Bigfoot. It was decided that we could make our greatest strives to get him when we were at our campsite. Once lunch was packed up we checked the area to make sure that we left no trace, not only to keep the nature beautiful but also to keep Bigfoot off our trail. We continued on our way, one eye on the trail and one eye looking for Bigfoot. We travelled the whole day with no sign of the beast we were searching for but our spirits were not down.

We finally reached the mysterious Elam Camp. It was a very wondrous place, near a creek, down in a small valley. There was even a pit toilet that lead us to believe that others had been there before us, perhaps on the same search for the elusive Bigfoot.

There was some downtime for our group to explore the camp site and the creek after we established our base camp. The creek was too high to cross and all the bridges were gone, just as we had suspected. We could see some rustling in the foliage across the way but it was impossible to get closer to investigate. As we turned back to go start making dinner we hear some strange noises and we tried to find the source but it was gone before we could even tell where it was coming from.

While dinner was being made Melissa and I left the group in the capable hands of the other trip leader Dani and we went in search of the mysterious beast. We hiked a small side trail and saw some really intriguing things. A sign that said the approximate age of the tree was 750 years, a snail and some of the largest trees we had seen all day. All these signs pointed to the presence of Bigfoot.

To feed our hungry appetites we made some delectable brownies topped with cinnamon sugar and snickers candy bars. We baked these delicious treats over the fire, which made them even tastier. Once they were finished baking the whole group dug in and finished the whole pan in 2 minutes flat. Afterwards we sat and digested while telling scary stories and reminiscing on what inspired us to hunt Bigfoot. We stayed vigilant even though it started to rain. We tried our hardest to stay up late and wait for the beast to come but everyone was very tired from the hike and we decided to turn in early. To help calm our nerves I read to my TentMates Melissa and Kendall from a book I was reading called Wild by Cheryl Strayed. It is a story of a woman whose life falls to pieces after the death of her mother so she decides to hike the entire PCT with no backpacking experience in an effort to rediscover herself. Melissa fell asleep to the soothing sounds of my voice and Kendall bid me goodnight as we closed our eyes and another day ended.

Again we rose with the sun, although we gained an hour of sleep thanks to Day Light Savings Time. We made the final call to hike out the way we came in, much the chagrin of some of the members of our expedition. It was the safest call because all the bridges were out and the river was too deep to be able to safely cross. As we cooked breakfast those same, strange, noises we heard the night before started again! Everyone grabbed their Bigfoot hunting gear and we searched for the beast. We looked high and low but he was just too elusive for us to catch. We finished our breakfasts and started to pack up our gear, making sure to, again, leave no trace because nature is a wonderful place and we didn’t want to contaminate it for others, plus Bigfoot was hot on our trail.

The hike out was, amazingly, much easier. The tension of Bigfoot being near was gone and the terrain somehow seemed so much flatter. I believe that the previous day when we were hiking the pressure of finding Bigfoot made the hike seem so much harder. We were able to look around and enjoy the scenery much more than the day before. As we made the final decent to where the van was parked we saw him. We finally saw the mysterious, monstrous, beast called Bigfoot.

We were only able to get this blurry picture but it is quite obviously Bigfoot. Our mission was complete and as we all piled into the van, weary from a long trip, we sighed happily. We caught a glimpse of Bigfoot and we had a very fun time doing so. The drive back was filled with songs and tales of Bigfoot. We made it back to Chico in the cover of night and had one last bonding game to remember all the good times we had together. As everyone disappeared into the night to return to their lives all I could do was bid them farewell and good luck on their next hunt.