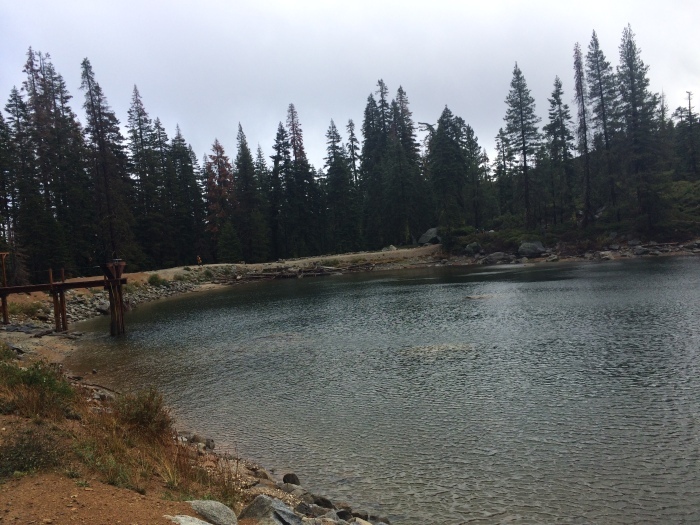 by TKCRAWFORD@CSUCHICO.EDU
The Latest Adventure Outings

Backpacking has been one of my favorite activities at Chico state. I have learned so much and it has inspired me to look at what I actually want to do with my life. I have learned so much from reading a really great book . It is a hilarious look at the basics of backpacking called Allen and Mike’s Really Cool Backpackin’ Book: Traveling and Camping Skills for a Wilderness Environment!. I really enjoy all the illustrations and helpful hints that the authors provide. It is funny but also very informative. It is a really interesting and though provoking book in that everyone backpacks a little differently and their perspectives are very insightful. The authors are very well versed in backpacking, based purely on their experience and teaching in the outdoors. If someone was to really want to backpack and have no experience whatsoever and they didn’t know anyone who had any clue how to backpack this book would be a perfect way to figure everything out.

Luckily for us, we also had a wonderful experienced backpacker that was able to teach us all the intangibles that were not available in the book. We learned everything we needed to know to be properly prepared in the wilderness. We were shown clothes to wear, told where to get them and it was even explained to us why we needed what we did and the consequences of us failing to be prepared. This focused on the theory of layering. We learned about materials that would insulate our body heat and other that would even keep us warm if it got wet. The most important thing we learned from that particular class was that cotton is extremely dangerous to bring in the outdoor because it does not insulate when wet and it takes a very long time to dry. At a different time we learned about how to properly prepare our shelter. We were taught knots and even different techniques on how to keep yourself warm, covered and dry underneath an expo-tarp. An expo-tarp is like a tent with no sides so it needs to be tied to trees or some other land feature. We learned how to start our whisper-light stoves, how to cook and even how to plan meals. Finally we were off on our adventure.

We all split up into our cooking groups and divided up our group gear. Our group gear consisted of a whisper light stove, pots and pans and an expo-tarp. Most people had packed their packs in a very interesting manner and it was good that we were forced to repack them. Some people had obviously not paid much attention to the book on how to pack your backpack. Once everyone had finally arrived and all the group gear was finally packed we left Chico and headed to Bucks Wilderness Area.

When we got down into Silver Lake we found a nice camp spot and my cook group set up our two tents. Some of the other groups struggled with their tarps so I tried to help them. Many of them had bad spots but sort of refused to move. After everyone was all settled in with their gear set up we has some free time to relax and enjoy the beautiful scenery. Some people tried to swim in the lake but it was really cold so only one person actually swam. Other people took naps and others explored the area around the lake.

When it started to get close to dark we started cooking dinner. Some of the people in other cook group forgot how to use their stoves so other people helped them. There were a few close calls where people over filled their spirit cups and almost lit the ground on fire. We made it through dinner unscathed and then most of the group stayed up to watch the stars but it was getting pretty chilly so we all went to bed.

That was when the fun really started. Once we were all comfortably in out tents and asleep it started to pour. The rain that was predicted came in full force. It rained most of the night and when there was time where it was not raining our wonderful leader scrambled around to try and help those groups that had tarps. It rained most of the night but luckily our cook group brought tents so we were nice and warm and dry.

In the morning it was very cold and everything was very wet. We started making breakfast and it started raining again. Slowly the weather got worse, the rain came down harder then it turned to hail and for a while it was snowing. It was very cold and many people were very wet. One person only had cotton sweat pants so I told him he could go sit in my sleeping bag to warm up because he looked boarder line hypothermic and I had a zero degree sleeping bag. I was pretty cold and I kept worrying about the other members of our class that were not as prepared as I was. I couldn't help but worry that they would have been freezing if I was cold. There was one guy who thought he was really tough and he stood in the snow with a track suit, the jacket unzipped, and refused to borrow clothing from anyone. Granted, he didn't complain but he looked miserable.

Everyone was very much unprepared for the weather we were getting bombarded with and so our leader made the call that we would not be able to safely spend another night because so many people had very wet sleeping bags and the dropping temperature meant that they would be extremely cold during the night. Packing up in the freezing rain was one of the most challenging things I have ever done. It was so cold and my gear was pretty wet, from letting cotton sweat pants kid into the tent, so I ended up just stuffing everything into my pack.

The hike out was tough because the rocks were so slippery but once we got going everyone was warmed up and we ended on a happy note.

All in all it was a good trip, very memorable. I had a great time and I will definitely be backpacking in the future, as a matter of fact I went backpacking in the Redwoods the very next weekend! I would recommend this class to anyone that is interested in starting to backpack or just has an interest in the outdoors.