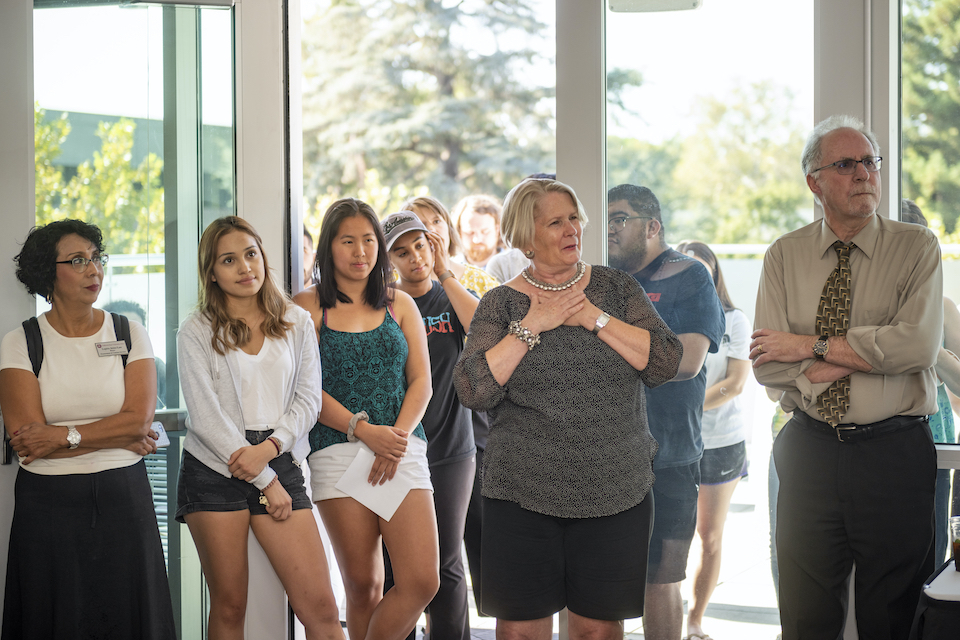 A Fond Farewell to Ann Schwab

Compassion, dedication, and community involvement are just a few ways to define a well-rounded person. In CAVE our staff lead by example and conquer any given task with ease and poise. Ann Schwab is no exception to this rule and has proven her capabilities over the past 20 years. Ann is approachable and loving with a charismatic charm that allowed her to accomplish many historical milestones while working with CAVE.

Community Connections Director, Alexandra Wynter said, “She made it a point to know everyone and have conversations with each of us.” Wynter added that “she’s dedicated her time to ensure student voices are heard...She also makes sure we provide the community with volunteers.” Schwab has also been credited for CAVE's motto, “Life is for Learning”, and has helped create a consistent system that helps us operate here at CAVE

Throughout her career at Chico State, Shwab was able to inspire the campus and local Chico community by variety of achievements. Schwab had the privilege to teach subjects on campus such as health and community services, recreation, sociology, social work and Education. Schwab continues to be an invited guest speaker at events around Chico State. Schwab had the pleasure of working with over 40,000 volunteers and around 2,400 student staff members. All together, she advised 22 CAVE programs in her time as CAVE’s program director.

Each of these programs focused on different but very important values, such as community involvement, education for youth, and public relations. Schwab’s knowledge from previous work as Chico’s Major was used to help each of these programs to succeed. She also expanded her efforts by serving on the Chico State Staff Council for eight years and as Chair for two years.

“It’s inspiring to see someone so involved in many areas and be very active in the Chico community for several years,” Alexandra Wynter said. Schwab has a strong belief in seeing all her mentees grow by giving people opportunities to flourish at CAVE. Wynter said, “Working with Ann was inspiring because having a resilient woman as a boss was motivating.” Schwab had high expectations of her staff but she was also understanding and provided a support system for those who needed it.

Aside from being heavily involved in the campus culture at Chico State, Schwab played a vital role in making some of the most thrilling decisions for the community of Chico. She involved herself in the City Council and to this day she is still a current member. In her time as the mayor of Chico, she has helped serve on several committees that impacted the entire Chico community.

Ann Schwab is a multi-talented individual that has shared her knowledge, love, and compassion with Chico State students encouraging those to live our motto, “Life is for Learning." Our Chico State Alumni continues to come back and contribute to her legacy at CAVE, knowing that even after her departure CAVE will still maintain those same values. To further bolster her legacy, she has created the Ann Schwab Scholarship initiative with CAVE staff and volunteers that exemplify CAVE’s mission statement. Schwab created an endowment for CAVE.

Schwab has empowered many peers and has demonstrated her commitment to our community by being so deeply involved in and out of the organization. She’s been an innovator by developing five annual service projects, she has also overseen 11 campus programs and projects. Her work definitely hasn’t gone unnoticed and we appreciate her dedication to CAVE throughout her years here at Chico State. CAVE is immensely grateful and thanks her for leaving behind a legacy that will go unmatched. We hope her future endeavors bring her endless success as she continues to inspire the people around her.