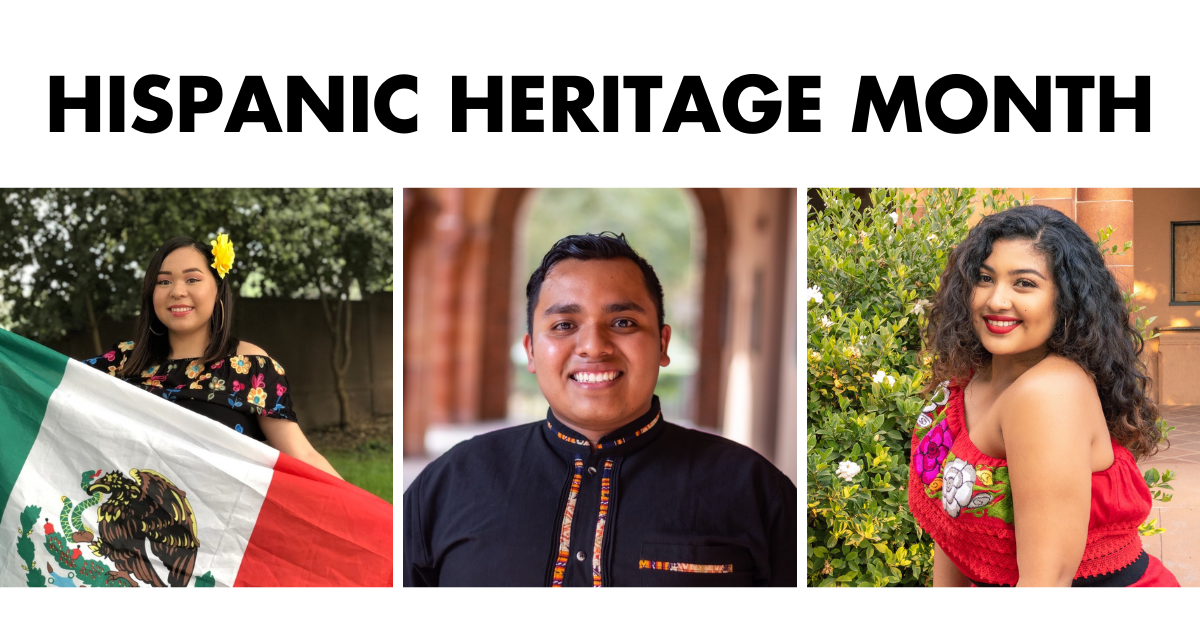 In the United States, Hispanic Heritage Month is a national celebration that traditionally honors the cultures and impactful contributions of both Hispanic and Latinx Americans. From the food to music, to the resiliency and strength of the community, there is something to be celebrated. Historically, it is a time to celebrate the anniversaries of the independence of several countries that make up Latin America, including Costa Rica, Belize, Guatemala and many more!

In recognition of this celebration, The Associated Students shared the stories of Chico State students on social media and highlighted their unique experiences as Hispanic/Latinx folk in our campus community.

Leslie Godinez is a third-year North Carolina-native majoring in Multicultural Gender Studies. Leslie identifies both as Mexican-American and Latinx. During her time at Chico State, she strives to help minorities feel heard, supported, embraced, and know they have a place in this world. “My heritage has taught me the beauty of diversity, cultural differences, and how those differences must be celebrated. I am proud of my heritage and want people to celebrate each other's heritage and differences.”

Marvin Herrera is a third-year from Orange County, CA majoring in Pre-Social Work. As a minority on campus, it is easy for BIPOC to focus on the negative and difficult challenges they face in higher education. However, Marvin found that being involved and challenging those narratives has empowered and shaped him. Marvin wants people to know that BIPOC exists and that they are more than what the media portrays about them. “Brown is beautiful, empowering, and most importantly, motivates us to contribute for a better tomorrow.”

Jennifer Mendoza is a third-year double-majoring in Political Science (Legal Studies) and Sociology. As a first-generation Latina from Oakland, CA she found that her background has made her college career difficult to navigate, due to [the] language barriers and moments of imposter syndrome. Navigating her way with support and outreach with programs on campus, she’s learned that the presence of Latinx folk alone is proof of the hard work they’ve put in as a community and a symbol of resistance to the years of generational trauma and systemic racism. “Y justo cuando la oruga pensaba que era su final, se transformó en mariposa.”

Alejandro Benitez is a Mexicano from Calexico, CA. Alejandro is a fifth year majoring in Electrical Engineering. To him, there is nothing more important about his heritage than the music he grew up with. From the music his parents showed him, to the musical stories his grandfather sung to him as a child, he has grown to deeply appreciate the contribution and trajectory that all those Latinx artists have selflessly given. Today, he is inspired by the music of Brazil and continues to show off his musical talents by performing to others. “I am 'orgulloso' even beyond frontiers.”

Pablo Tiznado is a fourth-year from Anaheim, CA majoring in Spanish and Political Science with an option in Legal Studies. In his experience, he’s noticed that not a lot of POC are in the field of law or have even seen the inside of a courtroom as lawyers. He hopes to inspire those around him and let them know that you can achieve anything you set your mind to regardless of where you come from or the color of your skin. “I love my heritage because, even with our different walks of life, we still become united as one.”

Hispanic Heritage Month is a time to pay tribute to the generations of Hispanic Americans who have positively influenced and enriched our communities. Here within the Associated Students, we value diversity and a sense of inclusion for all. We pursue diversity through equality in our programmatic, educational, and employment opportunities as not just an idea to embrace, but as a community to form, valuing the respect, richness, and understanding that a diverse community brings. And we will continue to highlight the voices of all students of our community.

Happy Hispanic Heritage Month to all our Hispanic/Latinx students, staff, and faculty at Chico State. 🎉

Hailey Barrera is a student marketing assistant for the Associated Students. As a senior Journalism major, she loves to write and tell stories about the world around her. At AS, she strives to make a platform to elevate the voices of the different student populations on campus.